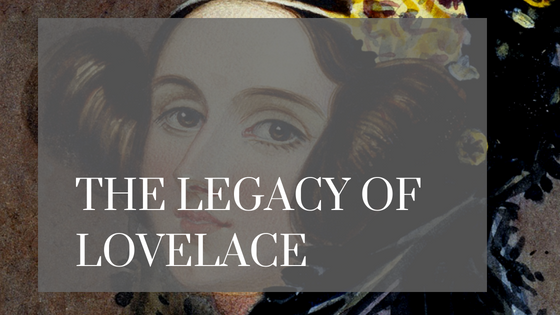 What happens when two 19th century aristocrats – one well-studied in the arts and literature and the other in arithmetic – come together and have a child? Well, the answer is the world’s first computer programmer, apparently.

Enter into the scene Ada Lovelace, or Augusta Ada Byron as she was known before her groundbreaking success in mathematics and her marriage to William King (King would later become the Earl of Lovelace). Ada was the daughter of Lord Byron and his wife, Lady Anne Isabella Milbanke Byron. Born into a wealthy family in 1815, Ada was afforded many opportunities not available to the majority of the general population at her time.

Ada and the Analytical Engine

When Ada was only 17, she met Charles Babbage, mathematician, inventor, and father of the computer. Babbage served as a conduit to Ada’s successes and helped develop her impressive intellect and skills. Through his help, Ada began studying advanced mathematics with Augustus de Morgan, a University of London professor.

Babbage invented the difference engine, the machine meant to perform mathematical calculations automatically and without error. Ada was fascinated by this invention, and she got a chance to look over it before it was finished. The machine promoted Babbage’s creation of a device known as the analytical engine, a predecessor to the modern computer of sorts which was designed to handle more complex algorithms and calculations than his previous invention.

Ada translated (she was also well-versed in multiple languages) an article on the analytical engine that had been written by Italian engineer Luigi Federico Menabrea and published in the Swiss journal. Not only did she translate the article, but she added her notes to it, notes that were three times longer than the original article. In 1843, her work was published in an English science journal, using the initials “A.A.L.”

In her notes, Ada described how codes could be created for the analytical machine that would enable the device to handle letters and symbols along with numbers. She also theorized a method by which the engine could successfully repeat a series of instructions, a process known in computer science today as looping. Her article contained a number of forward-thinking and potentially groundbreaking ideas, and for her work, she is considered by many to be the first computer programmer.

Like many greats, Ada was not fully appreciated in her own time, but her impressive work and staggering intellect has earned her many posthumous honors. In 1953, Ada’s contributions to the field of computer science were introduced to many by B.V. Bowden, who republished them in Faster Than Thought: A Symposium on Digital Computing Machines. In 1980, the U.S. Department of Defense named a newly developed computer language “Ada,” to honor Lovelace and all of the work she has contributed to a now booming industry.

A Broader Range of Jobs are Requiring People to Code

Careers that a Degree in Software Development Can Lead To

Why Kids Should Learn Code